500 people at first demo on trans health care ever

500 people demonstrated in Amsterdam on 26 June for change in transgender health care: “Get rid of waiting lists and diagnoses, towards self-determination and decentralisation”.

Last Saturday, 26 June 2021, the Trans Care Now! demonstration against the abuses in transgender health care and for a structurally different system of transition health care based on self-determination and decentralisation took place. About 500 people came, who walked from the George Gershwin Square past the Amsterdam UMC to the Stadion Square.

The protesters were colourfully dressed and cheerful, but also angry. “Fuck het VU, trans zorg nu!” (Fuck the VU, trans care now!) was the most frequently heard slogan, referring to the gender team of the former VUMC (now A-UMC), which, according to the participants, is primarily responsible for the abuses in transgender care. The demonstration therefore stopped in front of the hospital to give a speech by Principle 17, but the police made them resume walking quickly. Speeches were then given at the Stadion Square by, among others, the Trans Healthcare Network and Rebekka Timmer of BIJ1.

It was the first demonstration about transgender health care in the Netherlands, despite the fact that there has been dissatisfaction about the subject within the transgender community for a long time; transgender people seeking medical help face years of waiting times, outdated and humiliating diagnostic procedures, ignorance, and abuse of power. In 2021, transgender people will still be taken less seriously if they are non-binary, care will be delayed if people are autistic, depressed or have a traumatic past. Those who want to transition are forced to conform to the outdated image the doctor has of what a transgender is, and must dutifully answer inappropriate questions about sex life and masturbation habits. Few patients dare to criticise, because of the enormous power of the doctor. Assertive patients who offer too much rebuttal find that they are being thwarted and that care is delayed or denied.

These complaints are not new. They've been playing for decades. The claim that the gender teams cannot anticipate the growing number of patients was once credible, but it does not hold up ten years later. Also in the area of ​​the treatment itself, the gender teams promise improvement time and again, and time and again nothing changes. They cling to nonsense diagnoses and protocols, and refuse to give up the power they have over patients. Promises such as not having patients repeat diagnostic processes and taking non-binary people seriously are not being kept. A spokesperson for the Trans Care Now! says: “It is clear that we cannot expect solutions from the gender teams. They don't want to and they can't.”

From the podium of the demonstration, calls were made for a summer full of actions for change in transgender health care: a "summer of trans rage". This call was received with loud cheers by the demonstrators present. The Instagram page @vugendermistreatment, of which two representatives gave a speech on Saturday, has now started a petition addressed to the gender team. The first ultimatum, for an apology from the A-UMC, is in September. The transgender community is sure to be even more vocal this year. 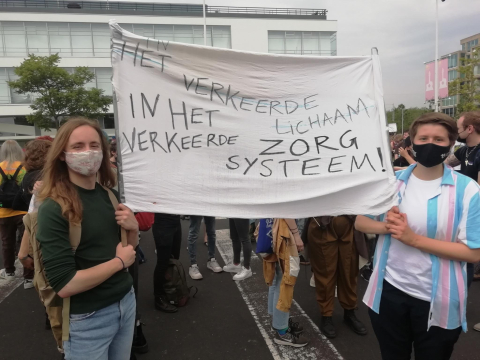