This morning, 25 May 2019 at around 10:00, the ICD Committee of the World Health Organization has approved the eleventh edition of this universal classification of diseases. An important episode in the fight for depathologising and health care on a human rights basis has ended. 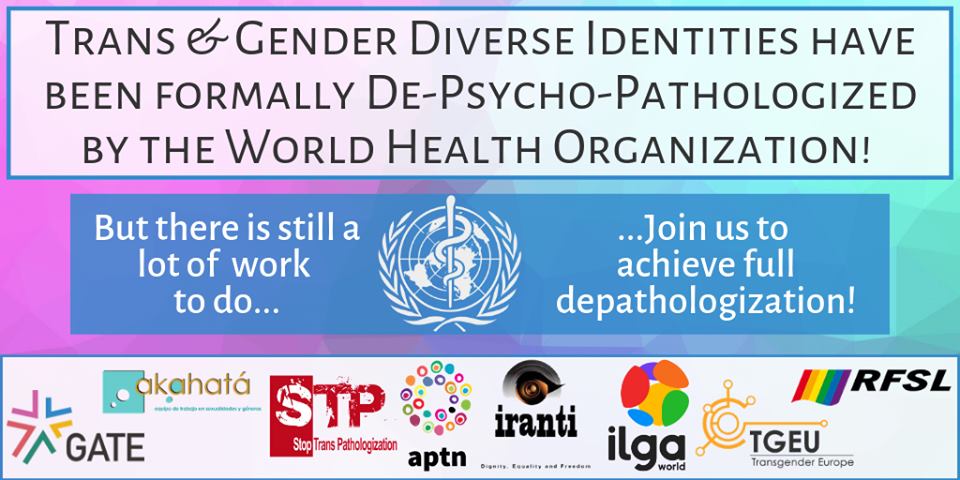 From 2008, first from Spain and Latin America and later also from the rest of the world, a lot of effort has been made to change the then almost universal idea that trans* people had an identity disorder. This was also the case in earlier versions of the psychiatric manual DSM and International Classification of Diseases (ICD). This was an important ground for politicians and medical professionals to first demand a psychiatric evaluation before trans* people could get the medical help or legal gender reassignment they sought.

In 2009, trans* activists in 38 cities in Europe, the Americas and Asia began organising a Day Against the Pathologising of Trans Iidentities, every year around the end of October. The initial target was the forthcoming new edition of the American Psychiatric Association's DSM (Diagnostic Statistic Manual for Psychiatric Diseases), which is being used worldwide in the Western world. Long and intensive fight has not yielded what we wanted. First, "gender dysphoria" is still there and with a problematic definition. Second, activists from the US, in particular, often felt that removal would lead to no reimbursement for trans* related health care at all. However, the ICD is a truly international, global classification and the World Health Organization (WHO) that issues it, is based on human rights. It is a UN organisation. That is why it also works here to use human rights arguments.

In the meantime, human rights experts have published the Yogyakarta Principles. These concern existing human rights, but then seen through the lens of LGBTQI people. Principle 3, for example, states that there is a right to state recognition, which is more than the right to "swap trees", from M to V or vice versa. And there is an explicit principle of care, Principle 17 (which we named ourselves after), which states that you have the right to the best possible health care, without discrimination on gender identity too. And Principle 18 calls overtreatment and unwanted treatment a form of cruel and unusual treatment, which refers directly to the UN Torture Convention.

Years of lobbying, in particular by GATE and Transgender Europe, at the EU and the Council of Europe and at the UN in Geneva, have ultimately led to this result. Now is the time to start lobbying for implementation on the one hand, and to demand that in trans* health care, the DSM will be replaced by the more up-to-date and research- and human-rights-based ICD-11 of the WHO. At the same time, we must move on. Because "gender incongruity" is already weird in the West ("We're not triangles after all!"), but beyond the West it's a completely nonsensical term. Unfortunately, this shows that the WHO is quite Eurocentric. The diagnosis for prepubescent children must also be removed, because these children have no medical needs for trans-related health care at all. And when it comes to psychological aspects, that's not part of it either; after all, homosexuality was also removed almost thirty years ago.

At the same time, the change for intersex people is not positive at all. The WHO introduces the among intersex people controversial term "disorders of sex devlopment" instead of the non-pathologising term "variations of sex characteristics". Various codes for gender variations lead directly to genital or gonadal (sex gland) surgery. This is strongly based on sex reassignment procedures and assumes a heavy gender stereotype and heteronormative frame of mind.

In short, today is a big day for trans* people! The battle continues. We must work together to continue to support intersex demands. Congratulations to everyone who helped to get us this far! 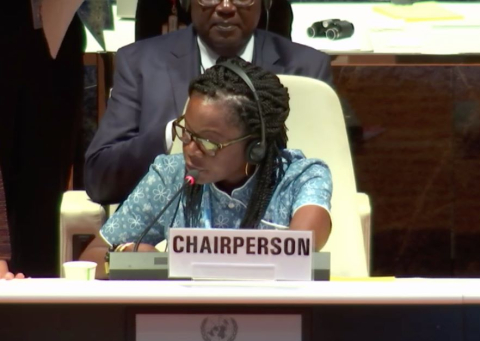